"The policemen or soldiers are only a gun in the establishment's hand. They make the racist secure in his racism."

Heartbroken and deeply disturbed after the decision to not indict Darren Wilson.

A weird thing happens on social media after a high profile, racially charged incident: The racists all come out and say the most asinine of things. I'm lucky that I am judgmental enough to only surround myself with likeminded folks, a very liberal bubble. But I'm not without my fair share of side-eye worthy moments, such is this time of being subjected to the thoughts of everyone you know.

What do you say? Can you have a meaningful conversation about such an unfathomable act on Facebook? I know I've never changed anyone's mind through social media but I sure have pissed people off.

I don't know that I can carry on a rational debate about the death of Michael Brown or the lack of indictment of his murderer. When I look at photos of these murdered young, black men, I see my son reflected there. I see a very real and horrifying possibility for him. I cannot shield him from becoming a statistic, my privilege only extends so far.

When I read terrible, hateful things about a murdered young, black man, or supportive words for his murderer, I know they don't come from anyone who would be an ally to my young, black son.


"Atticus, as you grow older you will see white men cheat black men every day of your life.do not forget whenever a white man does that to a black man no matter how rich or fine of a family he comes from he is still trash."
"To Kill A Mockingbird"
Harper Lee

"A system cannot fail those it was never meant to protect." W.E.B. DuBois
Posted by Melanie at 8:17 PM 0 comments

"My brown skin is stupid. White people think that."

And the next sound was my heart breaking into a billion pieces.

Our little family loves to travel. We are not good homebodies. On the weekend we are either outside doing work in the yard (not enough of this most of the year) or out and about. Ben and I have never liked to be at home and we've obviously instilled this in our son.

Our income affords us the privilege to be able to take mini vacations throughout the year. We could probably be saving the money or spending it on fixing up our home but getting away really recharges us and we love to explore new areas. It may be a brief trip to the coast (loving Long Beach, WA these days) or a long weekend to Oakland. Most recently we flew to Puerto Vallarta and stayed for a short time at an all-inclusive.

We hope our traveling continues to encourage our son's curiosity about the world around him. Being able to meet people outside of the US, hearing different languages, experiencing different cultures is one of the best gifts we are able to give him. It's the way towards acceptance and tolerance. We also hope that he realizes what a privilege and luxury it is to be able to travel. He was told more than once while in Mexico that most others in the world aren't able to spend time the way we were. I look forward to being able to expand on these conversations.

We learned we are not all-inclusive people. Portland has turned us into food snobs, again, lucky to live in a city with such brilliant restaurants. The food was not to our liking. The Mexican food served at the resort was great but anything else we found lacking. Additionally, the resort was further away from downtown than we would have liked. Before being parents, vacations meant a lot of walking for Ben and me. Taking a taxi to downtown was great (Mr. Littles even got to turn around in his seat and look out the back window!) but it would have been nice to be right in the thick of things.

Anyway, very little complaints about our dreamy Mexican vacation where it was 80s-90s and sunny every day. So much nicer than what we have going on in Portland. Looking forward to summer when we can hit the pool and the river as often as possible. 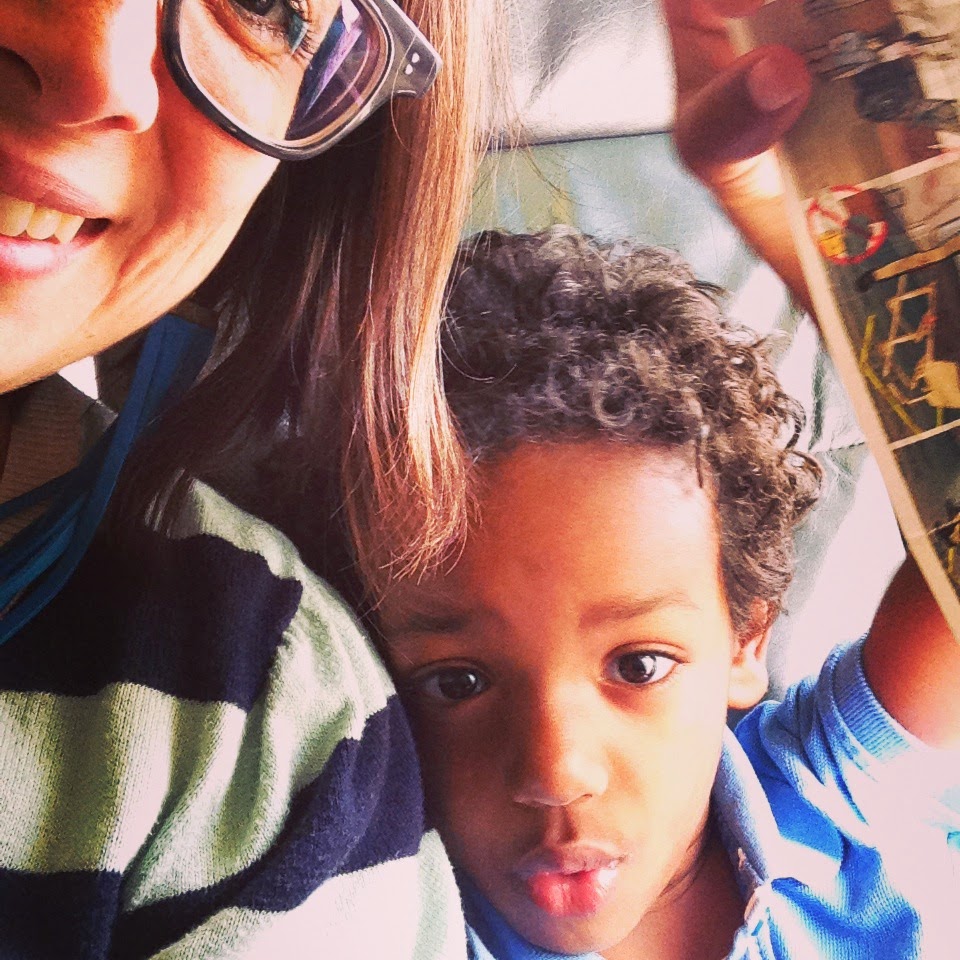 On the plane flying to Mexico First restaurant at the resort 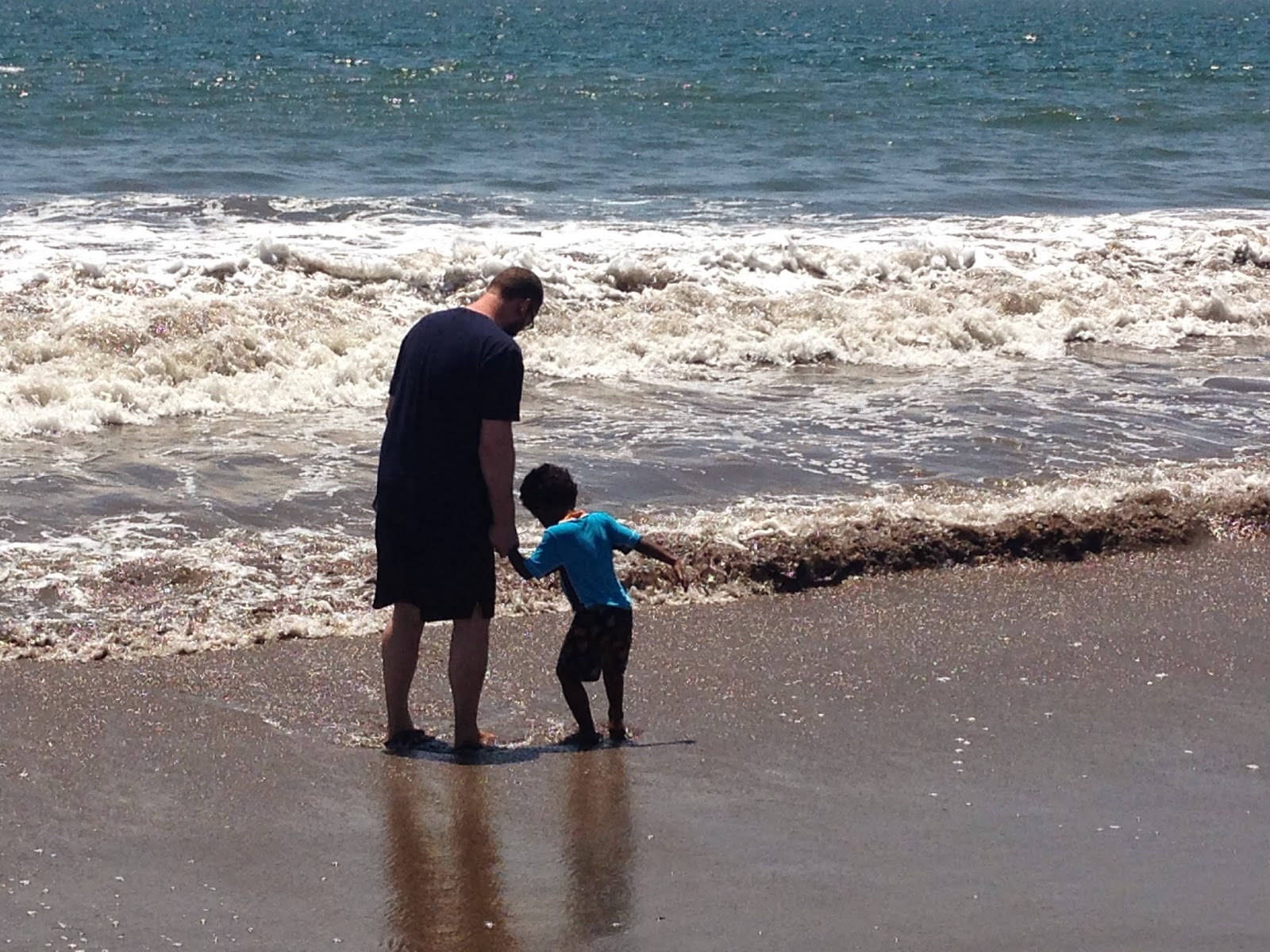 Hitting up the beach which was pretty murky.
For some reason no one was swimming in the ocean. 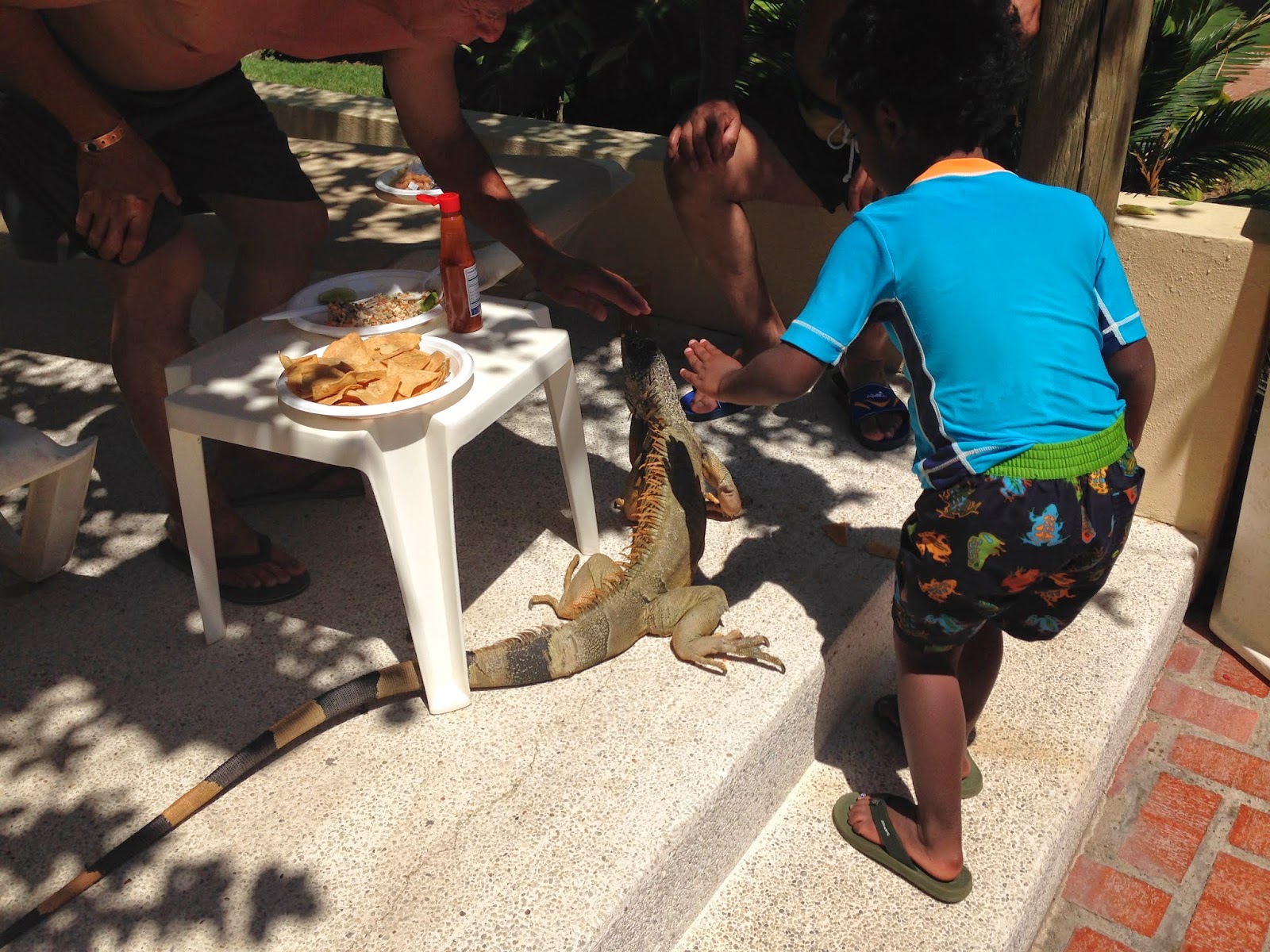 Mr. Littles got to feed an iguana, peacock and some koi.
He was so excited about all the animals at the resort. 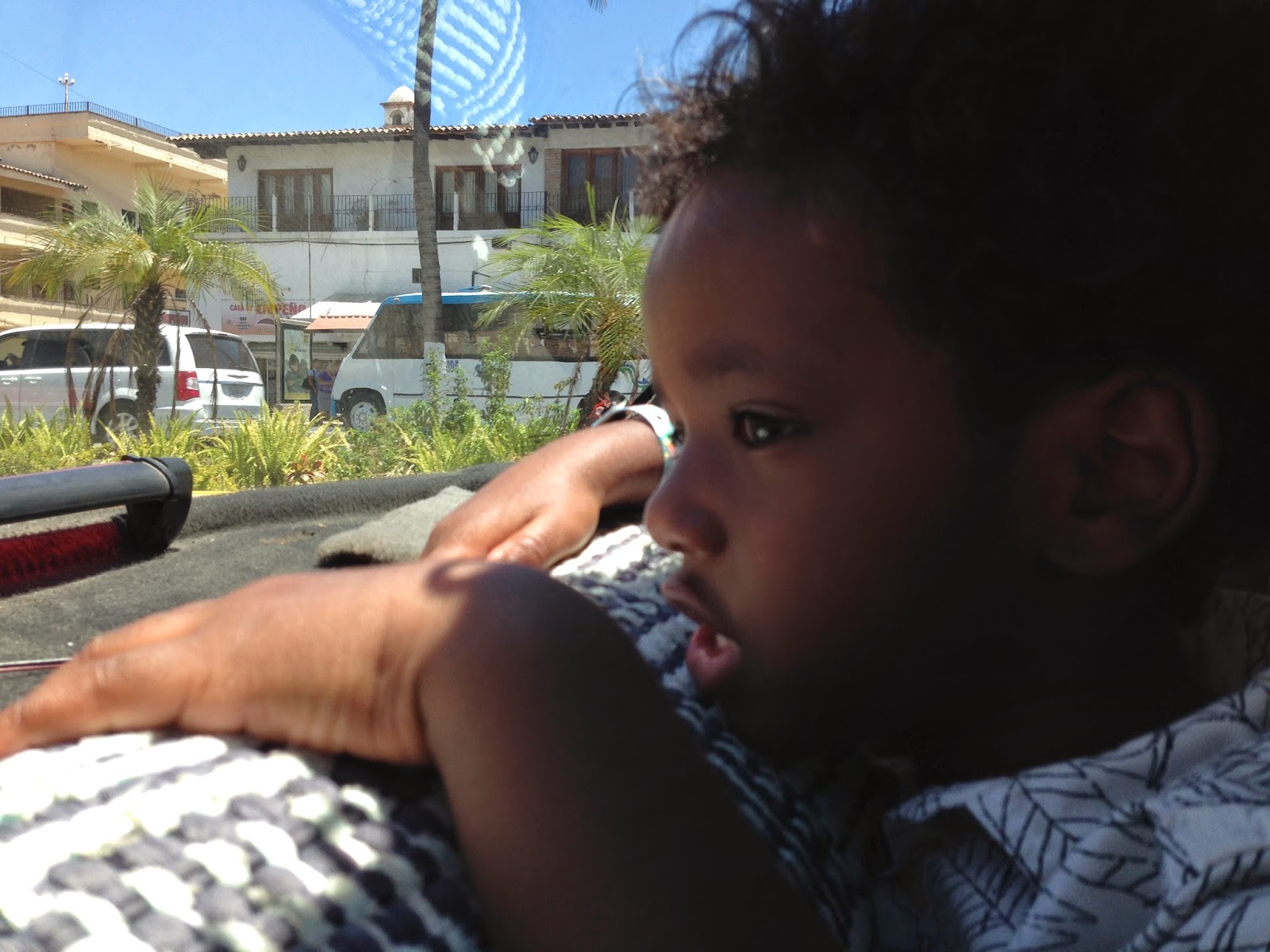 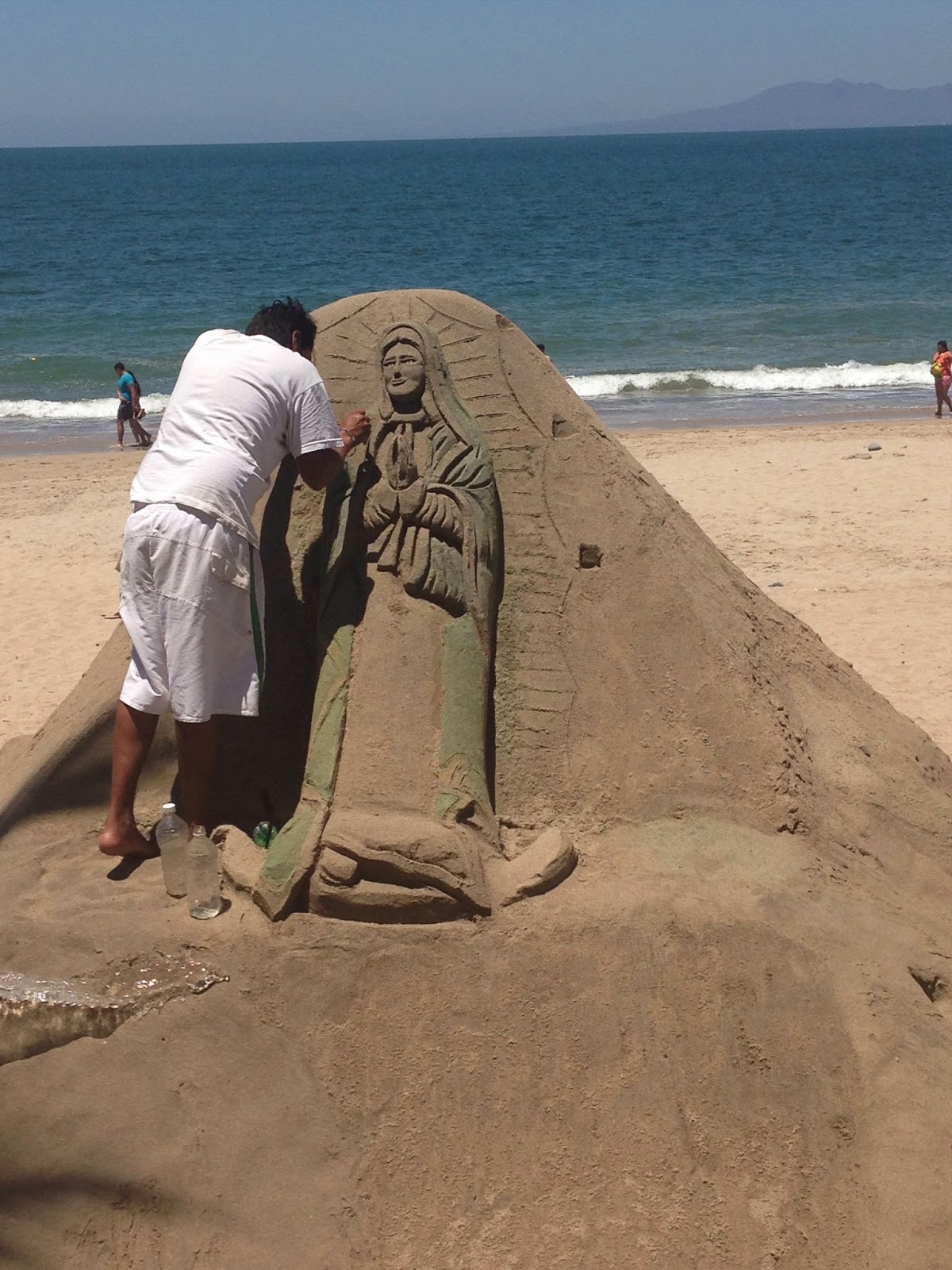 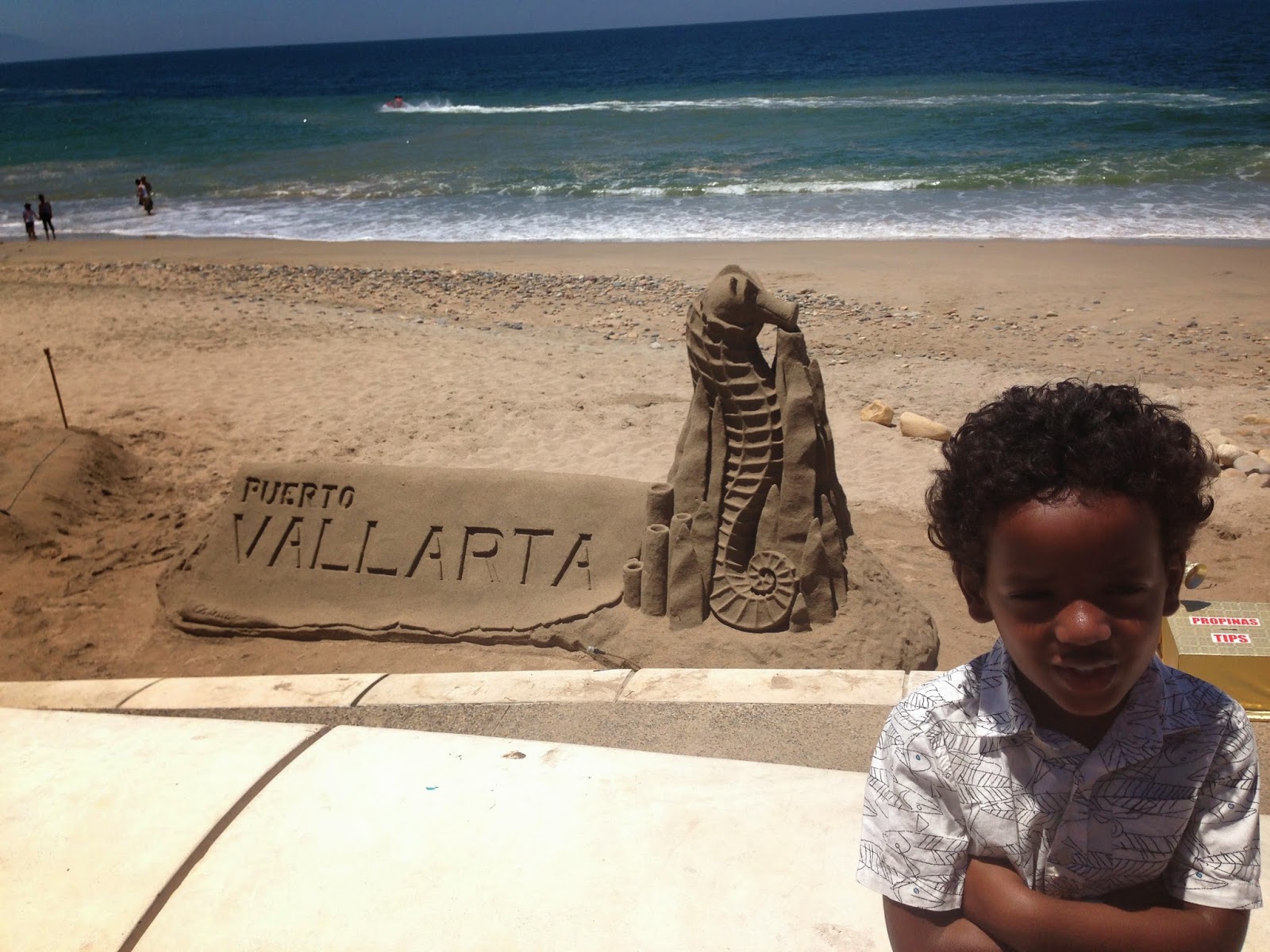 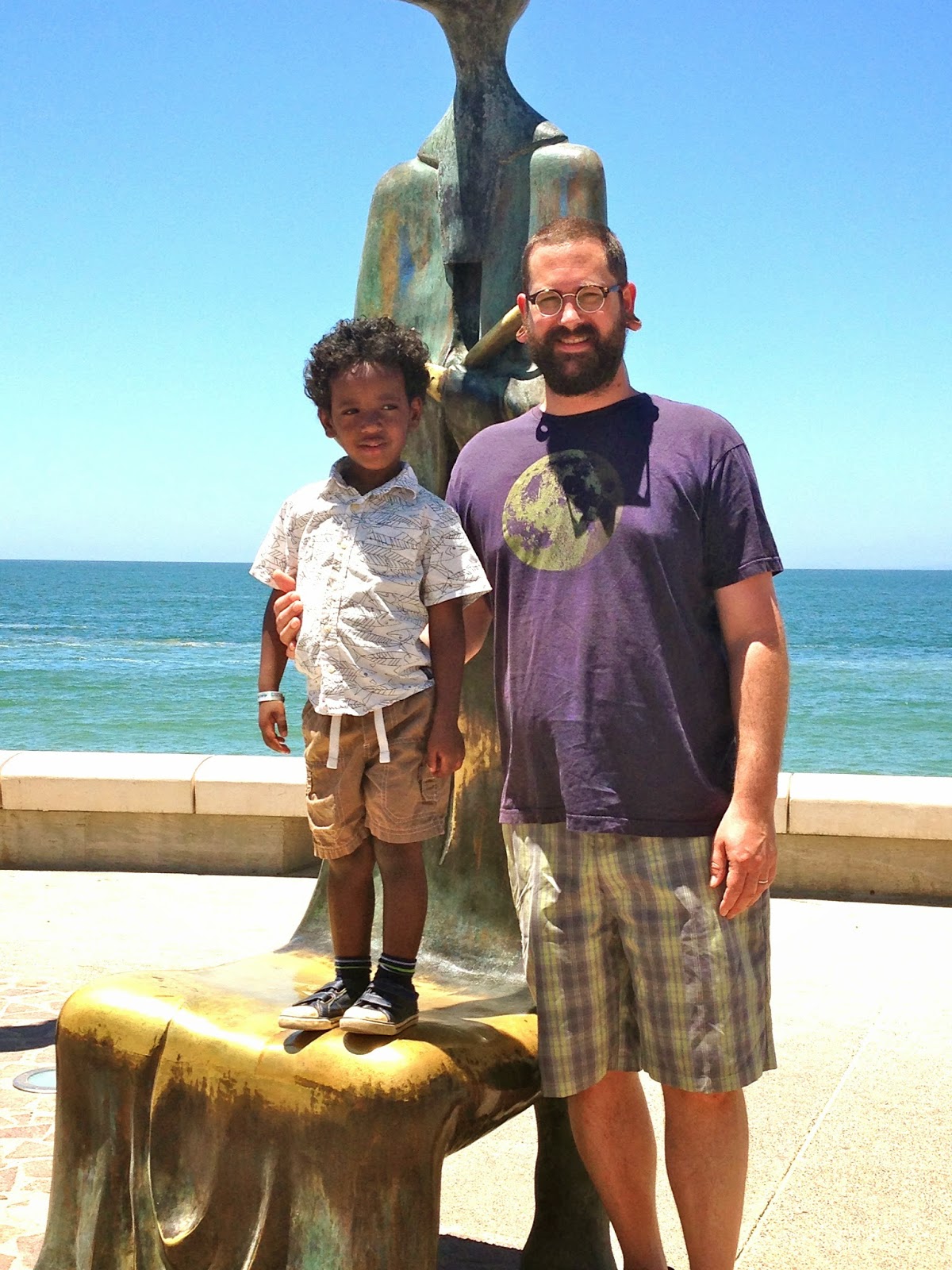 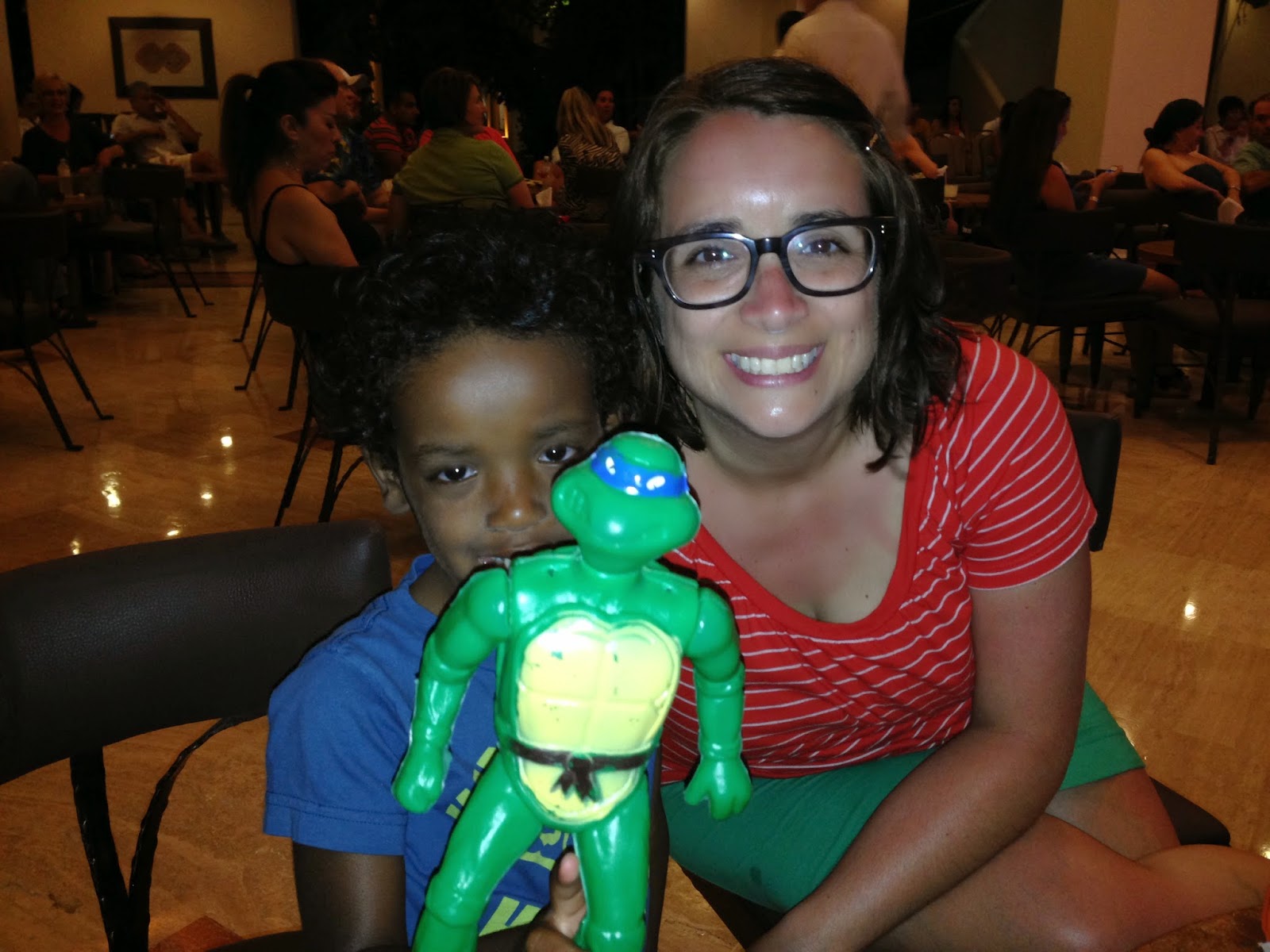 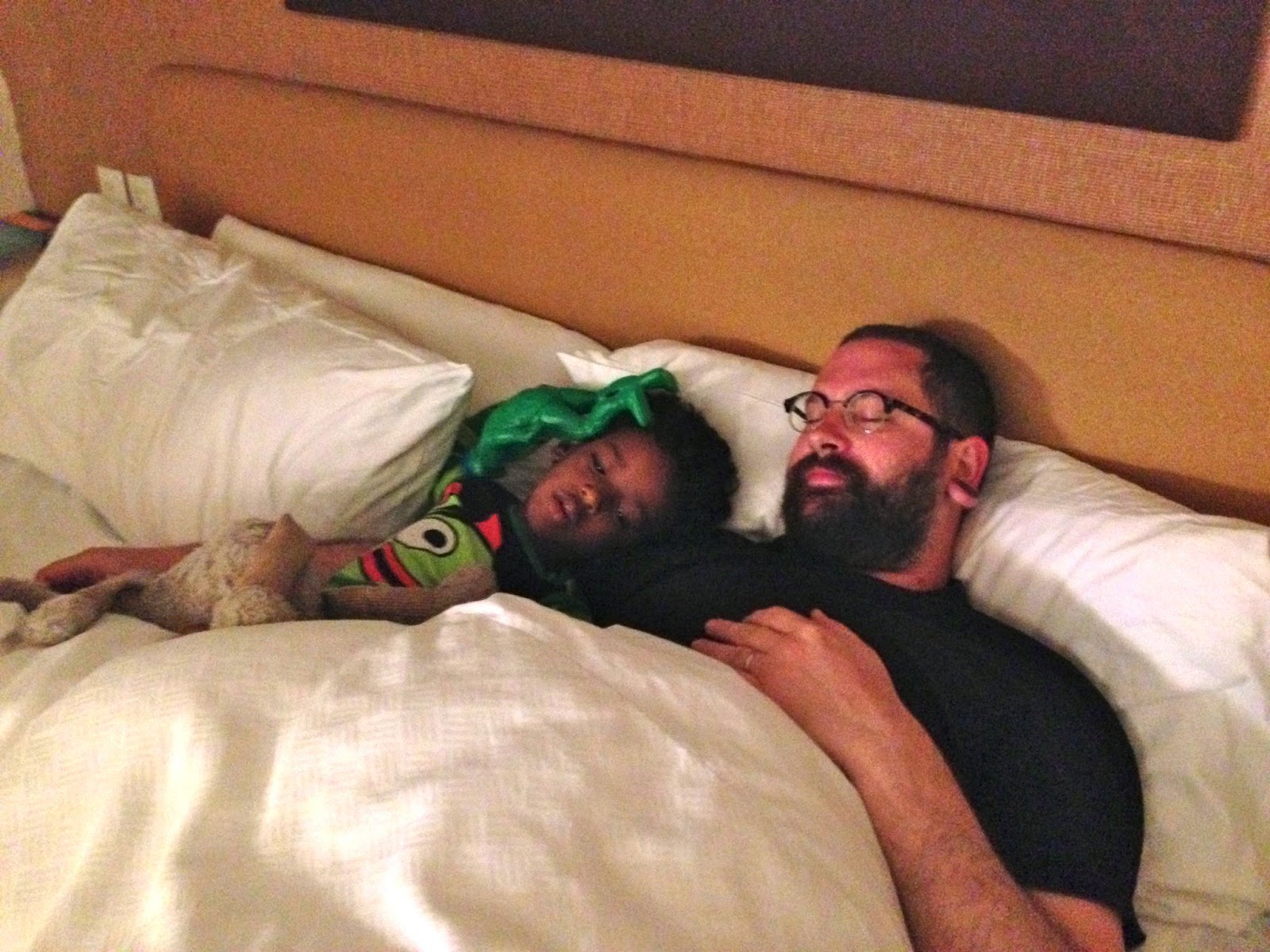 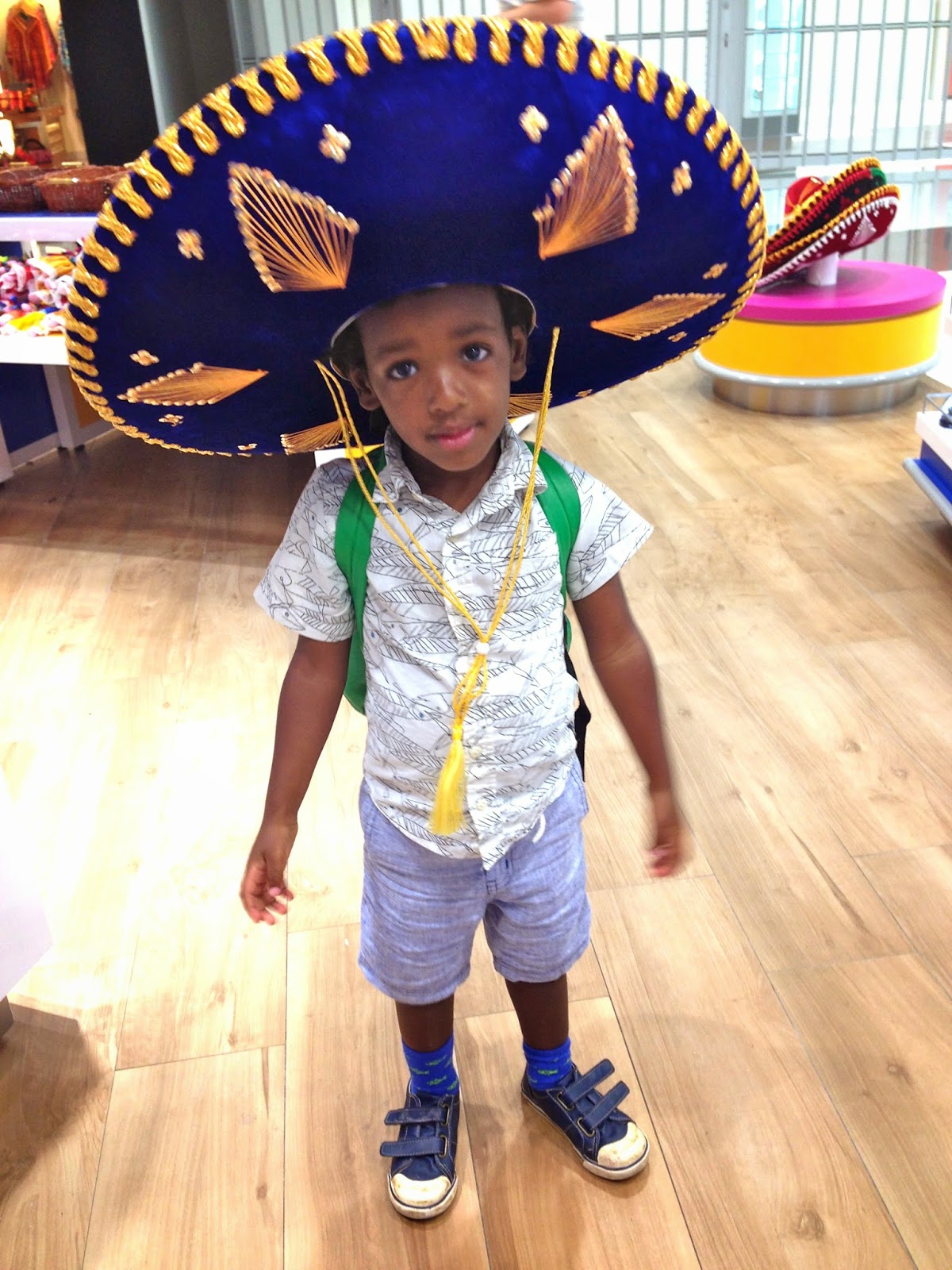 He's been four for 2 months. Four is so much better than three, like exponentially better.

At four we are discovering who Mr. Littles really is. And what he is not. 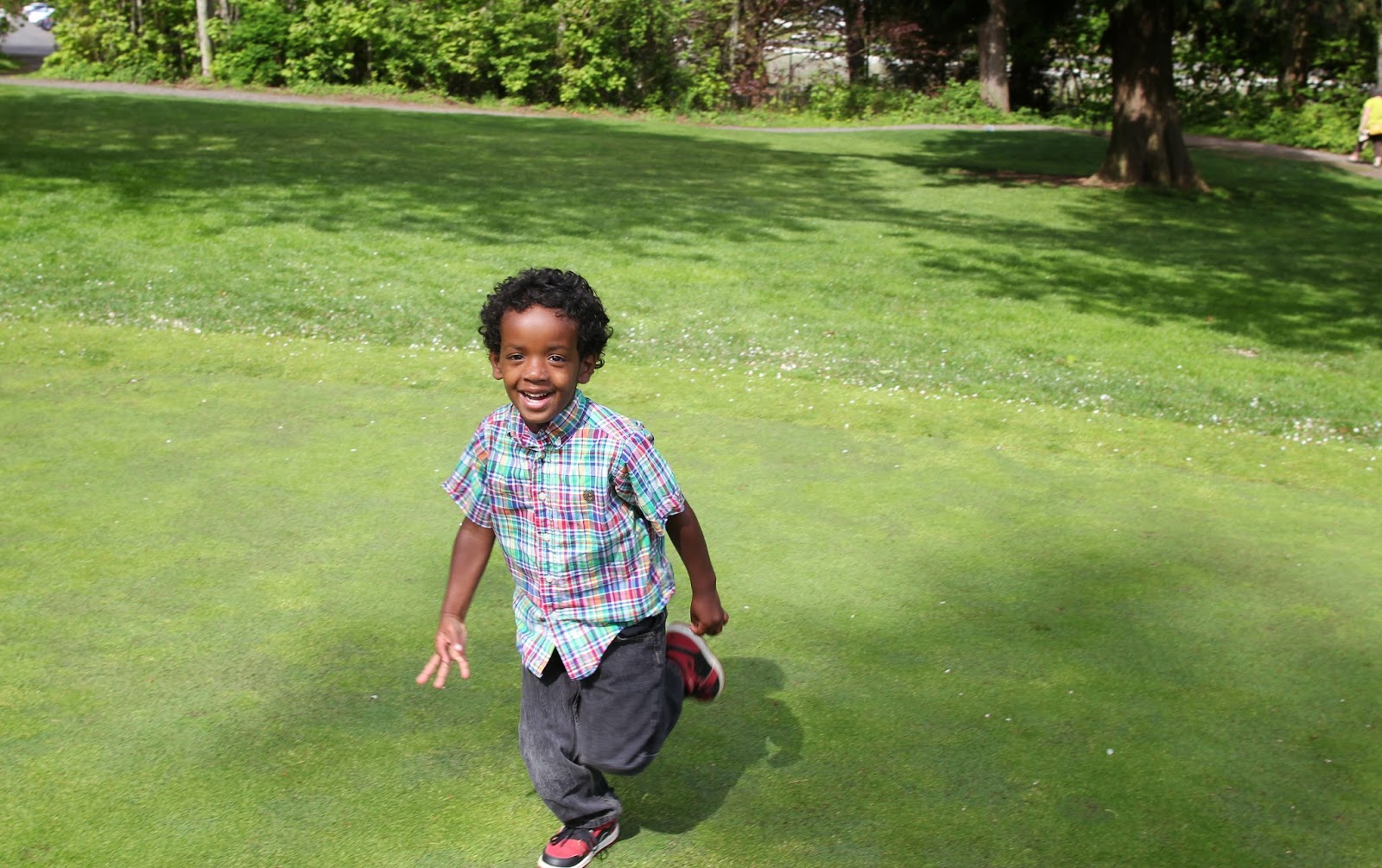 He is not a sit-at-the-table-and-do-art-work kind of boy.

He loves movement and busy-ness and interaction.

He loves to laugh and make others laugh. The picture above was taken at Pier 39. He had just gotten the bubble maker and was delightedly spraying bubbles all over on our way back to the Ferry Building. The response from people we passed along the way was so fantastic. Two elderly couples on a bench laughed and clapped! It was very sweet. 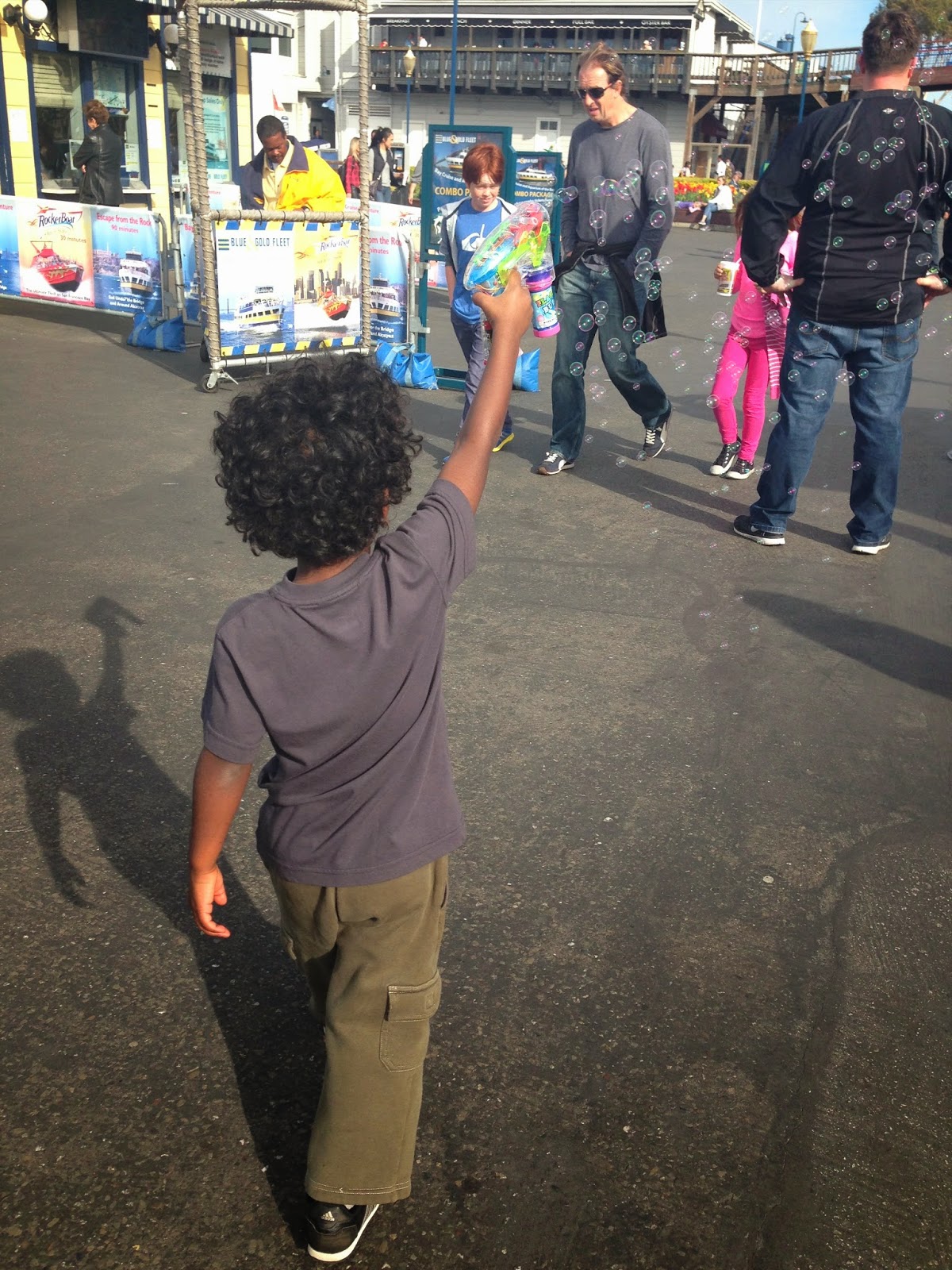 He is not shy nor quiet.

He talks to people incessantly. We repeatedly remind him he doesn't need to say hi to everyone which he does not understand.

On the ferry he was yelling into the wind, making friends with the other kids and grownups. 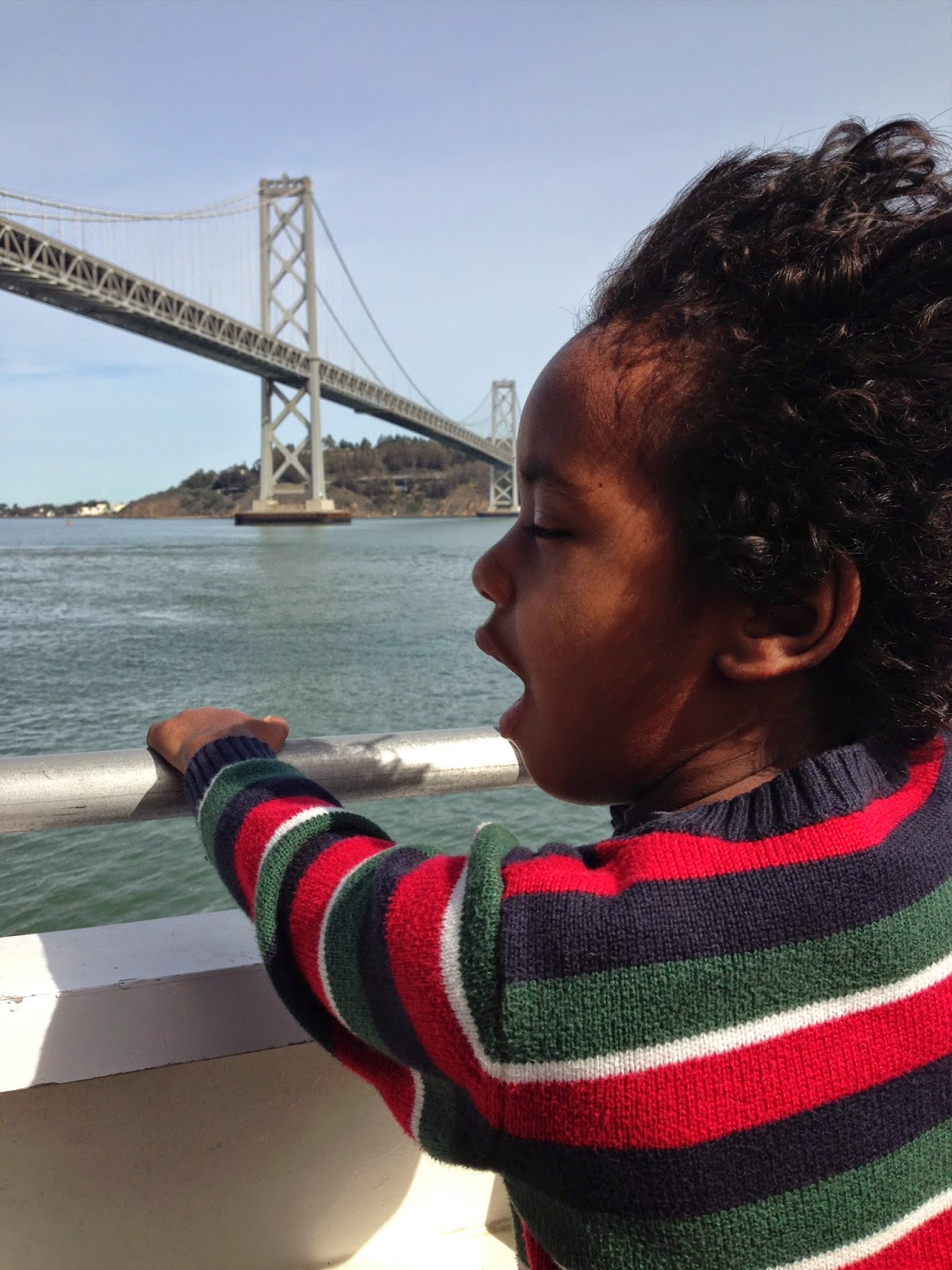 Not about everything. But currently he's asking about dinosaurs and spiders. He enjoys making his letters, writing his name and reading books.

Being four means having more involved conversations about adoption and his first family. I think he's really thinking about what it all means. It's a struggle to be developmentally appropriate in my language while being as honest as possible. 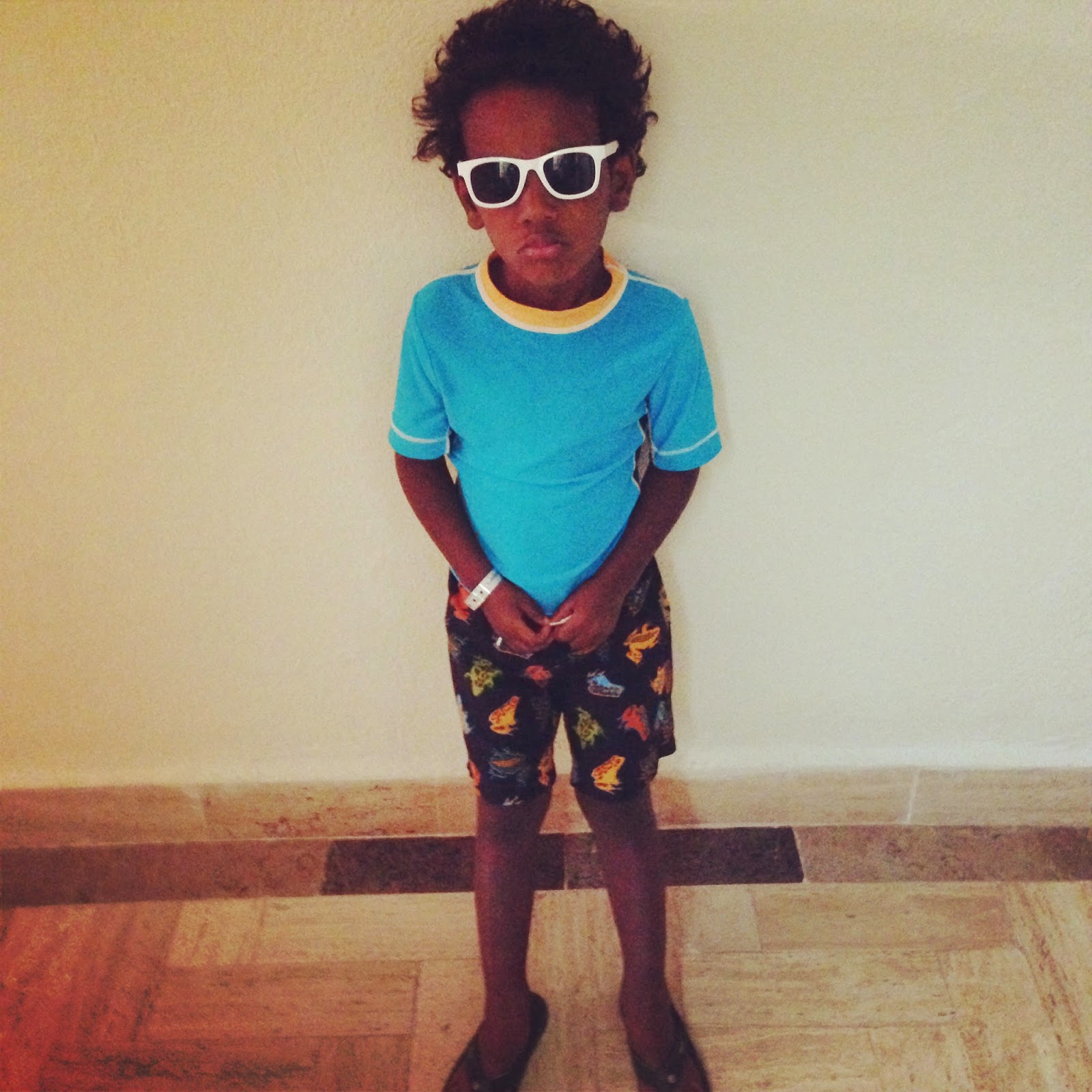 Good Causes That Need Some Love